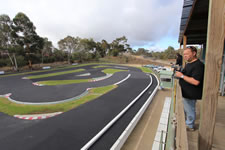 The 2013 AARCMCC Nationals at Littlehampton, Adelaide, South Australia were run on 22-24 November amongst controversy and racers voicing their opinion by staying home.

There was a great deal of criticism of the 2013 AARCMCC Electric On road Nationals. Some justified, some not. The loser has been the EP On road class at a time when EP Off road is going from strength to strength in Australia.

The entry list read like a club meeting, and a small one at that, with only 34 entrants running in the finals.

Six drivers competed in F1 which proportionally was a fair turn out.

The National Rules were used with 21.5 blinky and rubber tyres.

On the positive side some committed South Australia racers are pushing to get F1 up and running at Hobby Habit in Adelaide. Good luck guys. Check out the RC Tech thread here.