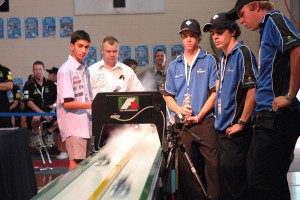 Schools from around the world compete to develop small scale F1 cars. One of the categories is cars that can travel 25m in less than one second. The Australian finals is in February and Australian teams have been very successful in recent years.

Teams get access to small wind tunnels, CNC milling machines and all sorts of cool equipment in order to design their car.

The F1 in Schools™ Technology Challenge is the world’s largest secondary school technology program. It involves over nine million students from 17,000 schools in 31 nations.

Australian schools have been the World Champions in this compeition in 2012, 2011 and 2005/6 and have been in the top 3 in every year since the competition started in 2004 (except once).

If you'd like to get involved you can contact the REA who administer the compeition in Australia or contact your local school to see if they are involved. Non-school entries are accepted in some classes.

The 2013 Australian National Final is the pinnacle competition for the F1 in Schools Technology Challenge in Australia with 27 teams from around the nation vying for the prize of the Champion Professional Class and Development Class teams who will represent their country at the 2013 World Final.