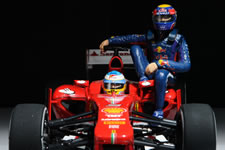 S37 Racing has sent us photos of his amazing RC tribute to Fernando Alonso giving Mark Webber a ride back to the pits at Singapore in 2013.

This is Fernando's F138 Scuderia Ferrari of 2013 modelled on a Tamiya F2012 body shell on a Tamiya F104. The Coanda exhaust cowl and front nose were scratch built. He has also modified the suspension to four-wheel independent. The model is a fully functional RC F1 car and achieves a five minute run time from a small LiFe1100 Tamiya battery. The steering wheel, drivers arms and head turn with the steering servo. It can be run at low-speed even while carrying Mark Webber :)

The model has been entered into the Tamiya Plamodel Factory Shinbashi RC Modelers contest of 2014. We wish you all the best in the competition!